FM19 – An Argyle Journey 2: The season kicks off

Hello and welcome back to An Argyle Journey.

With the introduction out of the way, it’s time to get into the football, smash these pre-season games and kick-start our League One campaign. 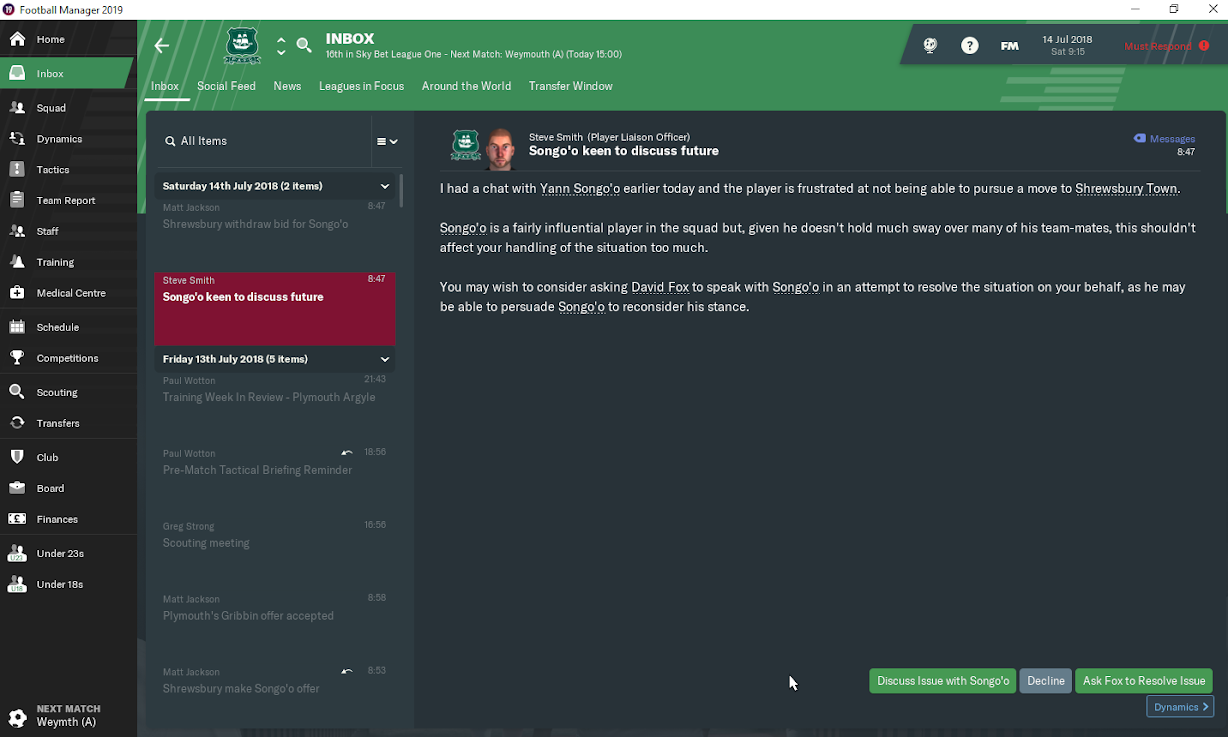 As mentioned in the previous episode, Yann Songo’o is very much a wanted man in this league and we ended up turning down a £50,000 bid from Shrewsbury which really upset the man.

I greedily tried to haggle for some more money for him, ambitiously asking for £70k, but Shrewsbury weren’t having it and never came back in for big Yann. 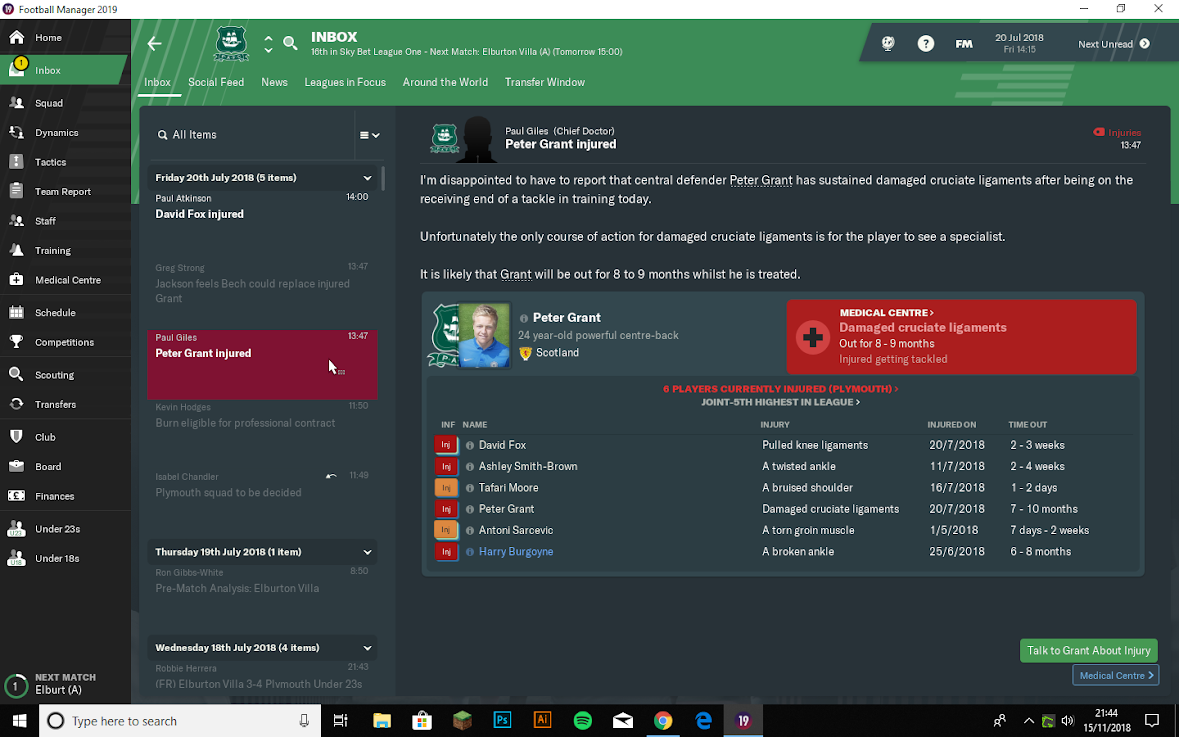 New signing Peter Grant has done his cruciate ligaments in pre-season which only goes to justify my decision not to sell Songo’o to our rivals.

Luckily we are stacked with centre-backs at this club. Unfortunately, none of them are very good as evidenced by their real-life counterparts performances this season.

Next season we will look to address that issue, but for now, I’m going to have to work with what Derek has left us.

Antonio Cassano bizarrely has signed a contract with us, but I’ve messed up here and if he makes 10 appearances for us this season we have to keep him another year. Not ideal for a player that the game is telling me is ‘past his best’.

We’ll have to keep a watchful eye on that this season.

One of the first things I do in this game is to try and set up a senior affiliate with a top club.

Simon Hallett came back with either Arsenal or Manchester United, both great clubs at developing young talent.  I picked United because they always have good youngsters, and they were offering us more money. Nearly £100k a year and no loan fees. Happy days.

Which brings me on to our next signing… 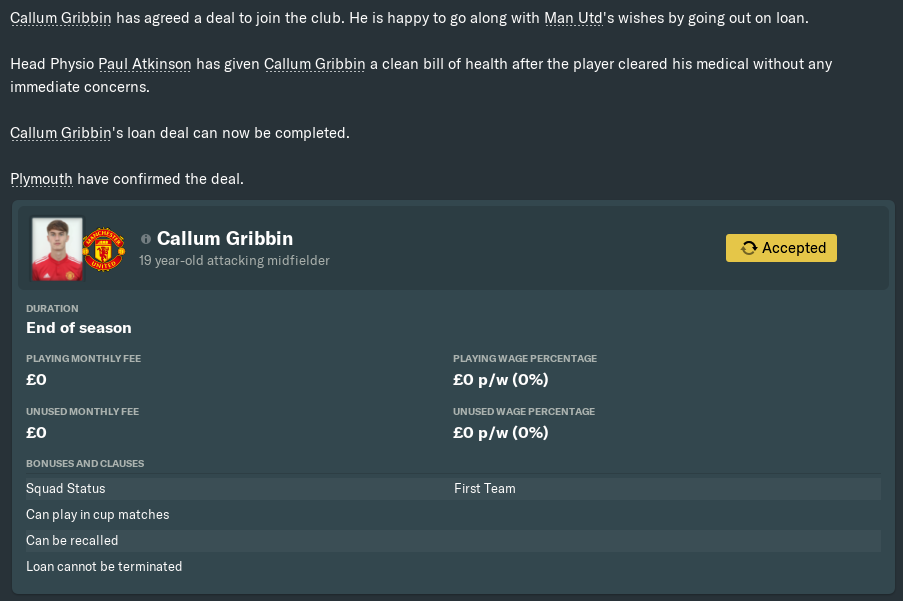 This lad was on the shortlist I posted in part one and it was only right to sign him from our new affiliates on a free season-long loan. He can play all across the attack and in central midfield. Another flair and creative player to add to our attack.

Before the season kicks off we have 5 pre-season games to get through. The only really challenging game is against Bristol City. 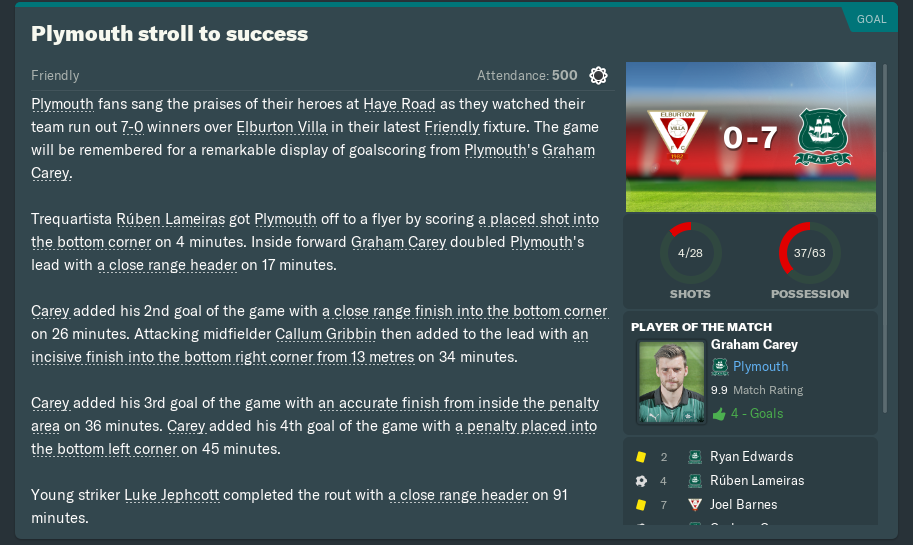 Carey bagged 4 against Elburton Villa playing in an attack force of Cassano, Gribbin and Lameiras. Elburton stood no chance. 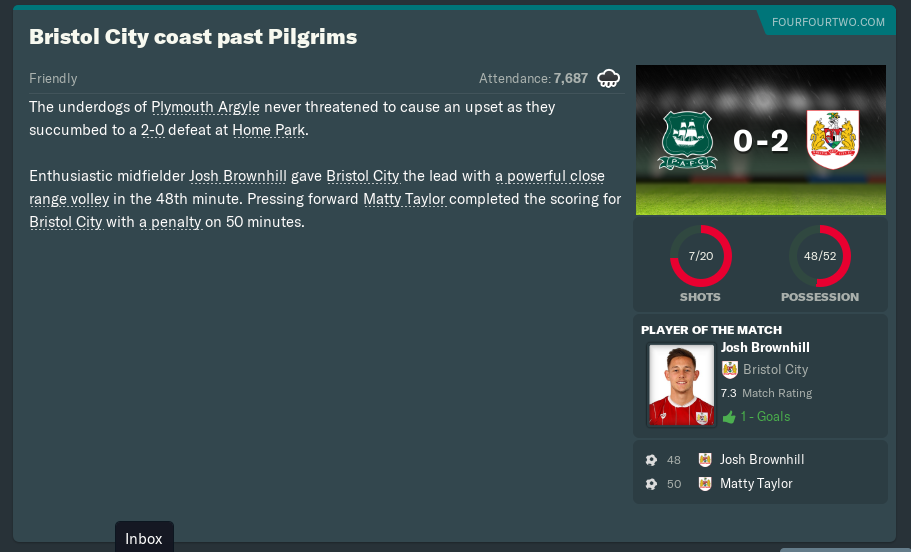 Our Championship opponents Bristol City were much harder to break down. I went with a more direct and defensive approach, which honestly didn’t work and Bristol City were able to get the win without much effort.

4 clean sheets and 4 wins overall marked a good pre-season but we had a lot of annoying injuries and players like Sarcevic weren’t able to play at all.

That’s our Checkatrade trophy group if anyone cares. Not very kind to us.

Now with pre-season out of the way, it’s time for our first league game, Walsall away. 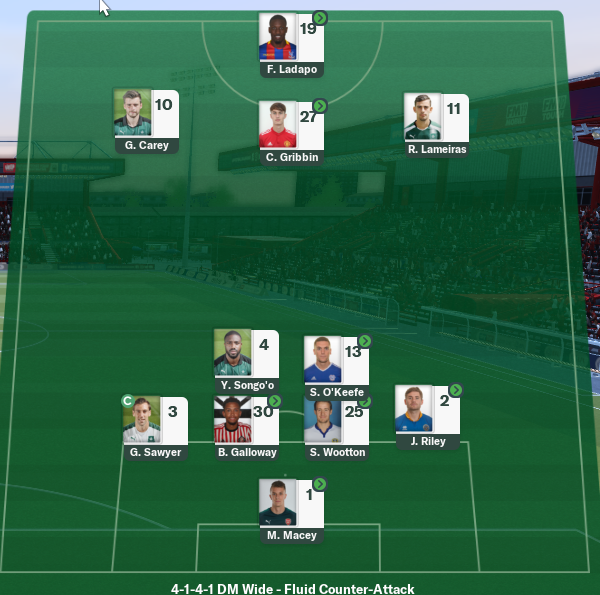 Our growing injury list meant a change of formation to the one I was planning to use. David Fox was unavailable. Jamie Ness, Conor Grant and Sarcevic weren’t match fit which led me to use two defensive midfielders to break up the play and get it to our creative forwards. In defence, Ashley Smith-Brown was also injured so Sawyer stepped in.

It was a pretty bad start going 2 goals down in under 20 minutes, but it was Freddie Ladapo who rose to score our first goal from a header to pull one back.

But things got pretty bad. Our best player, Graham Carey has to go off with an injury at the half an hour mark.

I try to push it to the back of my mind, but I’m anxious about the possibility of losing Carey to a bad injury, but I hardly have time to think before we win a dodgy penalty.

With Carey not on the pitch, up steps… Stuart O’Keefe?

He slots it away, ( only just ) and it’s game on, I want a point. That would satisfy me.

The second half gets underway, Walsall try to get back their lead when boom.

Lameiras hacked down on the wing and he has to go off, my two best and only real effective wingers gone in the first game. We have to hold on now.

Sawyer gets sent off.

But we end our opener at 2-2 and I rush out of the game and prepare myself to find out how bad these injuries are. 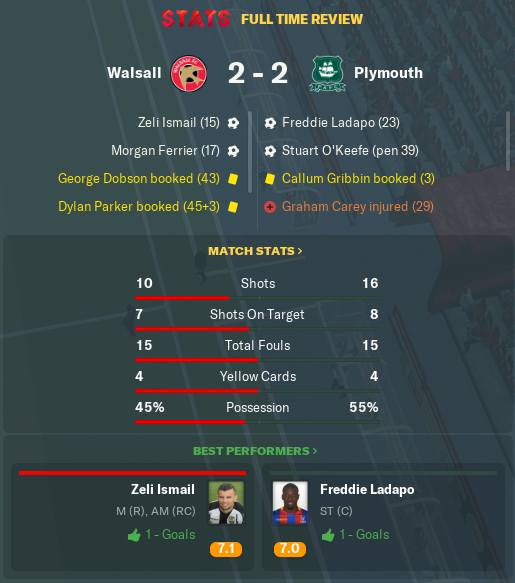 3 – 6 weeks for Graham, it could be worse but we will definelty miss his quality. 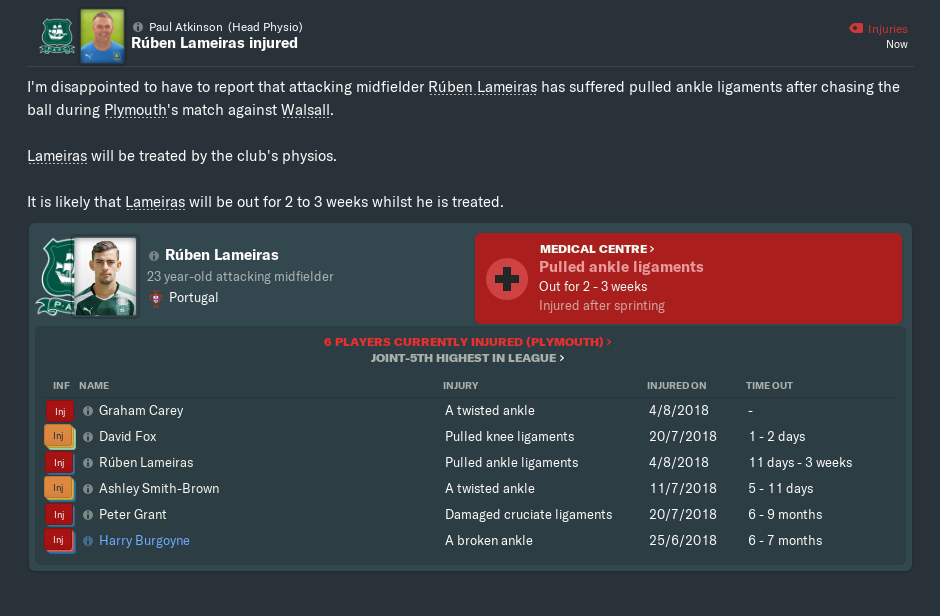 Ruben is only looking at a couple weeks which isn’t too bad for us, but we have to get by our first home game of the season without them both. 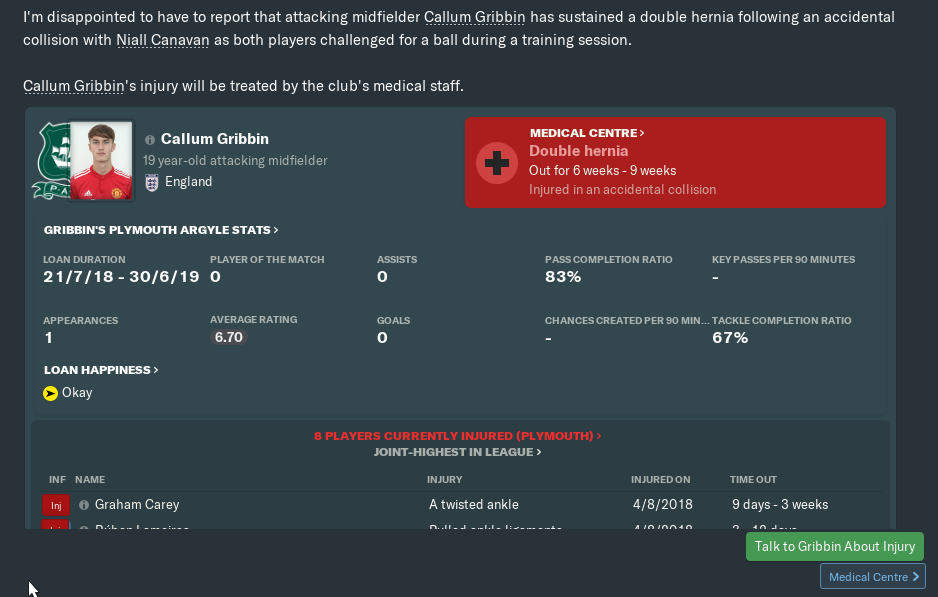 But the worst injury of the lot comes to new boy Callum Gribbin who is out for a whopping 6 – 9 weeks. 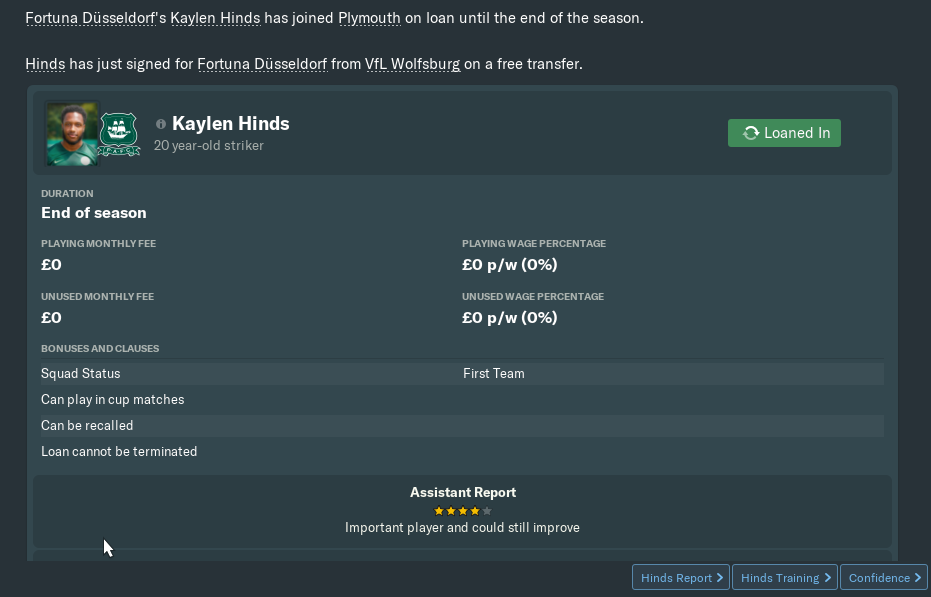 Our scouts recommend Kaylen Hinds, because what we definitely need right now is more strikers??

I sign him anyway because he is a lot better than any of our current strikers and he costs nothing at all. Sorry Freddie, Ryan, Antonio, Calum, and Alex.

But of course, he comes to us already injured so will have to wait for his debut. 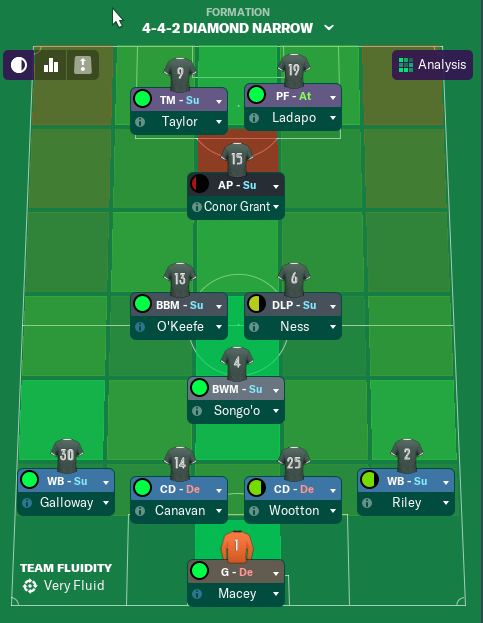 The injuries and suspension to Sawyer throws up some selection headaches.

I opt to ditch wingers all together and play a diamond. Galloway has to shift over to left back and Canavan comes in to central defence.

Sarc is still not fit enough to start so I play Conor Grant in behind Taylor and Ladapo even though he can’t play there apparently. But I believe in him.

Two strikers up top at Home Park, fans are gonna love it. 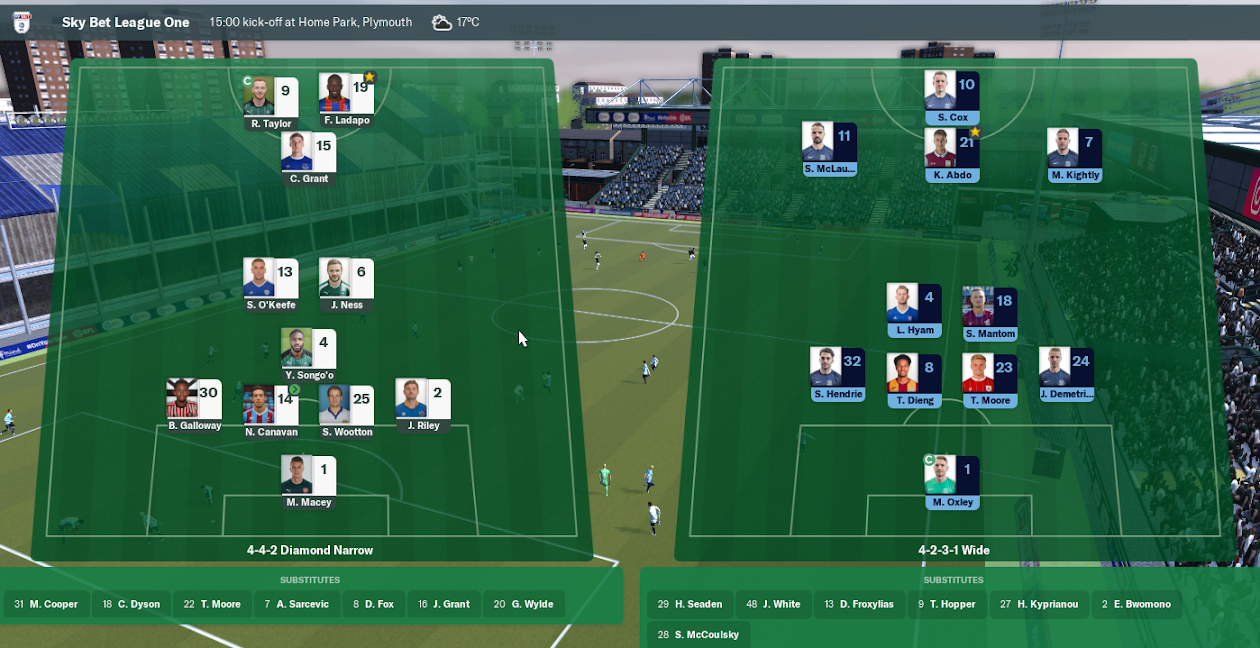 Ryan Taylor captains the side infront of a packed Home Park ready to witness their first league one game of the season.

I’m aprehensive, I don’t know how things are going to work out, how Conor Grant will play in an unfamiliar position. It’s anyone’s game.

It’s a close game, no real major chances. Ryan Taylor misses a penalty. I have to take him off, he’s having a shocker. It’s like for like with Calum Dyson making his debut off the bench.

10 minutes left, we get a throw in, Galloway throws it towards all of 6’4 of Dyson who flicks it on and who is it who runs onto the ball and strikes home? Conor Grant. Lovely goal. I’m a tactical genius. 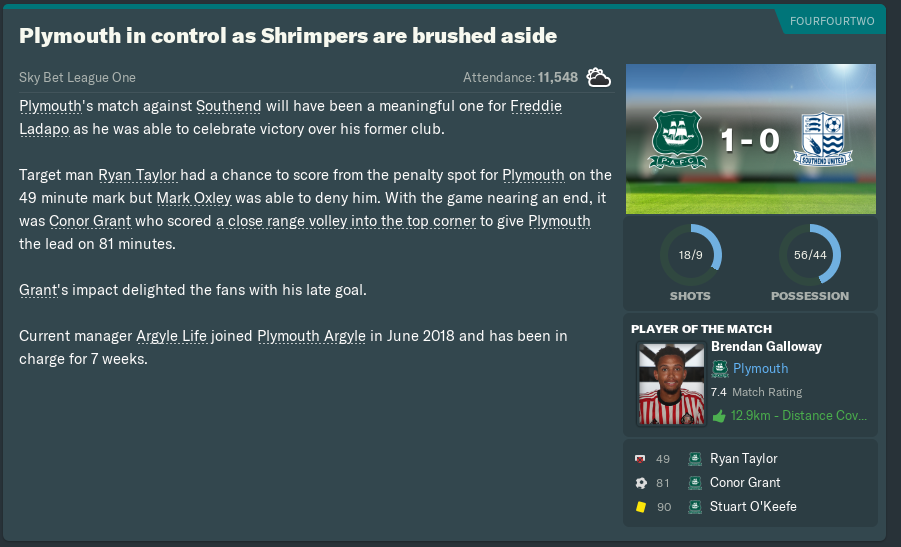 Three points, what a win.

We can get by without Graham and Ruben after all. 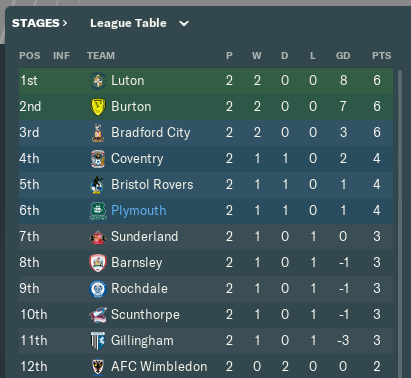 It’s nose bleeds all over the shop as we sit as high as 6th after two games.

Make the most of it.

Up next, straight back down to earth with an away tie to Nottingham Forest in the League Cup.

Join me next week for the next update. I will play a few games and probably be in September in-game after some really tough fixtures.