Welcome to the first instalment of ‘An Argyle Journey’, where I will be playing the simulation video game ‘Football Manager 2019’ as our beloved Plymouth Argyle, as we aim for glory and do what no manager has ever done before ( in real life ), and reach the Premier League & beyond with PAFC.

In this first entry, I’ll be giving a rundown of what we’ve got to work with, how the game works and asking you who I should sign out of the players I’ve shortlisted at the end of the article.

First things first, for those of you unaware what football manager is, it’s basically the largest and most in-depth football game on the planet consisting of a humongous database of real-world footballers and staff each with their own carefully scouted stats.

It’s straight into meetings with new chairman Simon Hallett and Assistant Manager Paul Wotton to say hello and get the pleasantries out the way.

I plan to keep Paul Wotton at the club long-term, but his in-game stats best suit that of a defensive coach and will probably bring a new man in to be Assistant Manager next season… If I last that long.

The rest of the current Argyle staff are all here, including Derek Adams dad, George, a scout. Awkward.

But this is a video game and he doesn’t care so I tell him to keep scouting Scottish talent. But really I tell Greg Strong to tell him because he’s Chief Scout and that’s his job and I’ve got stuff to do.

A run through of our finances says we have £85,000 pounds to spend on transfers. That’s around 4 Nathan Blissett’s or Steve Maclean’s left arm. Unless we find a cheap gem, we won’t be spending money at this point. Now I know how Derek feels.

We also have £3000 odd quid to spend on wages, which is enough for a few free transfers and loanees.

Transfer and wage budget can be adjusted, so we can take money from the transfer budget to put into wages and vice-versa. We can also ask the chairman, but he will refuse at this point.

I’m debating hiring a Director of Football because he can hire other members of staff for me such as sports scientists, data analysts and a new fitness coach. I don’t have the time for that because I’m lazy.

For the first time in Football Manager ( i think)  Pompey are listed as one of our rivals under ‘Competitive’ which will satisfy the ‘NOT-A-DERBY’ crowd.

There are lists of legends, icons and favoured personnel. Unfortunately, a lot of them are retired or not in the game depending on what leagues are loaded. David Friio is an elite level scout for St Ettienne and honestly, the game for me is complete when we are able to sign him to our staff. Lilian Nalis is a pretty decent Assistant Manager in France. I want him as my number two one day.

I’ll be trying to bring in as many ex-Argyle playing/staff fan favourites as I can over the course of our journey. If they are good and can offer us something that is.

The stadium capacity is true to real life and I’m not sure if that will go up once the renovations are complete, if anyone knows let me know.

Our ‘above average youth recruitment’ will see us hopefully take in some decent newly generated 15-17 year old players every year. Having some local boys in the team will be pretty special if we get that lucky.

It’s time to look at the squad and see what Derek has left us with.

The game gives me this little overview of the players and tells me that Graham Carey is the key player, to everyone’s shock I am sure. Tafari Moore has potential and we have one current international but I can’t figure out who that is and I forgot to click it on it when it appeared. I’m guessing it’s Dan Rooney for Northern Ireland ( shout out to Nick’s Dan Rooney article here btw https://argyle.life/youth/white-tiger-analysing-dan-rooney-at-truro/ ) or that Graham Carey has finally got that Ireland call up he deserves. ( it’s not )

It shows us Kyle Letheren is wanted by Sutton United. Gregg Wylde is of interest to Bristol Rovers and Scunthorpe, and that Bristol Rovers, Doncaster, Rochdale, Bradford, Gillingham and Shrewsbury are all willing to give us money for Yann Songo’o. Do we sell him? Just not sure whether the money is worth losing his versatility as a player for us.

Let me know what we should do!

With an average age of 25, it’s a nice mix of experience and room for player development.

The game shows player ability by using a star system that is relative to the players at the club and staff member who is judging them. So let’s say if Messi or Ronaldo join our team Graham Carey would probably go down to 1 or 2 star player relative their stats and ability.

There are a lot of other screens that go into insane detail about what our squad is good at but I won’t overload this article with ton’s of screenshots for now.

Player stats are rated from 1 – 20, 20 being amazing. And Graham Carey looks great. Reported as a ‘Championship level player’ according to our staff.

Here is Ruben for comparison and for the fact that Graham and Rubes have 18 and 19 flair, which is just insane and will play its part in our tactics for sure.

I’ve already identified the areas of the squad I want to improve and will get to that shortly.

It’s time to find out what’s expected of us this season, our second back in League One.

The boss says avoid relegation and reach the third round of the FA Cup which I think most Argyle fans would be more than happy with if we achieved that in real life.

I don’t want to overestimate my football manager ability but I reckon mid-table is achievable.

The media prediction is 19th which I’ll take. Also worth noting that Macey is considered the best goalkeeper in the division and is well rated in game. Graham Carey also considered the 4th best player in the league.

Very good quality in goal and attack definitely gives us something to build around.

Just 5 pre-season fixtures to get through before the season begins. I’ll be playing them during the rest of this week and report back with the next instalment on Sunday so get your feedback and suggestions in before then.

You can pick 3 tactics to train and use at one time.

This is just a basic plan for me to tweak and build around in pre-season.

As ever I wanna know what you suggest I do, or if you think I’m a terrible manager.

In this year’s edition of the game, you can pick from a number of styles, such as gegenpress or tiki-taka for example. For our first tactic, I picked the ‘fluid counter-attack’ system in a 4-3-3 or 4-1-4-1, however you wish to interpret it.

The idea is to play out from the back and find our two most exciting and damaging players in Carey and Lameiras ( that creative flair ).

This system kinda needs someone who can play out from the back and is good with their feet. Someone like Zak Vyner who we had on loan last season, we’ve really missed his composure on the ball. I’ve identified one player to fill that hole and I’ll get to him in the transfer section below this.

Everything with these tactics is subject to change, such as the player roles and positions.

I’ve gone with the Fox, Ness & Sarcevic trio in midfield. We will see if they compliment each other in-game, as well as they do in real life.

This is my attempt at trying to play the fluid counter-attacking system Argyle enjoyed for the most part last season during the surge up the table.

I’d play this tactic against teams of a similar ability to us, and for the majority of our home games.

This second tactic is more of a defensive version of the first where we look to utilise the strength and ability of our target men, Taylor and Ladapo. 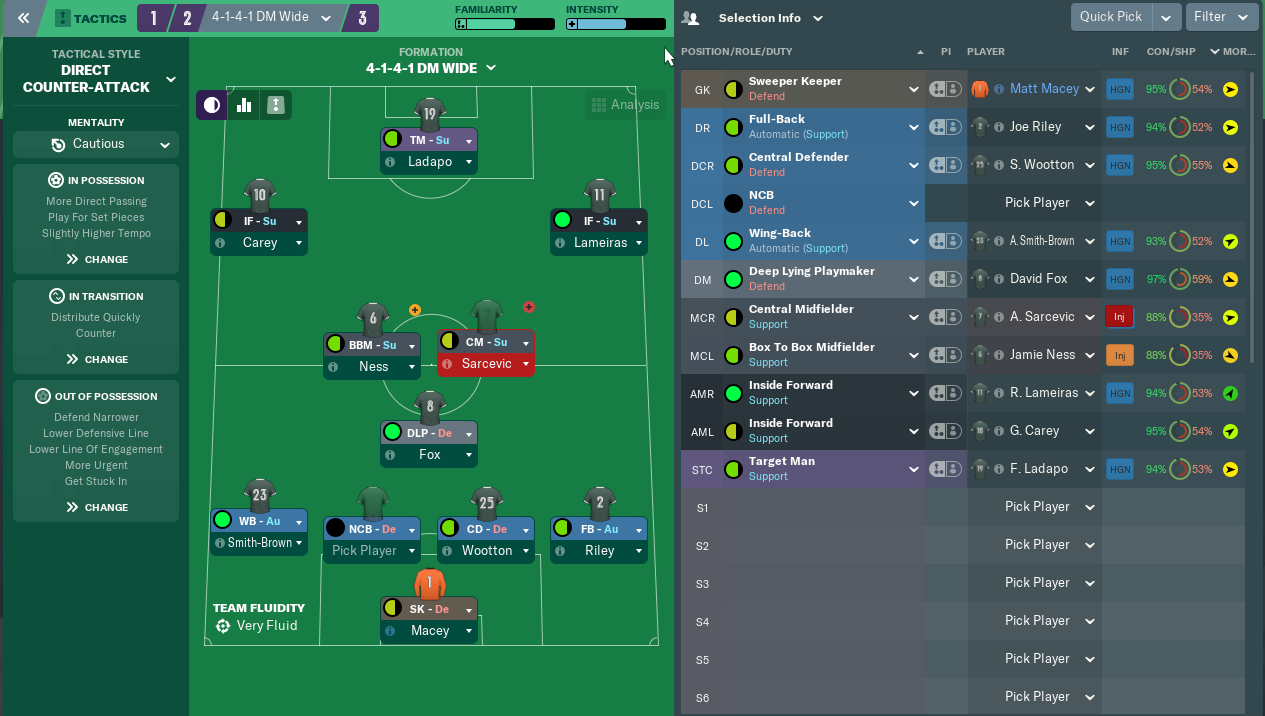 It would be against the team’s a lot stronger than us and for difficult away games. I’m not great at defensive tactics in Football Manager, so as always some tips and suggestions are welcome.

The third option is something completely different and I’m letting this spot be open for anyone who wants to suggest a system or even send over a tactic file for me to try out.

So I said I’ve already identified one area of the pitch I think we need more quality and thats a ball playing center back.

I’ve made an offer for Everton’s Brandon Galloway on loan.

He’s more than capable of being that ball playing defender as well as giving us cover at left-back as Sawyer declines over the season.

Another area I think we could strengthen is a more creative central midfielder. Someone bursting from midfield linking with the front 3. Sarcevic is good at that, but really our only option and injured at the moment. Ness works hard and has good passing, but lacks the pace and dribbling I’m looking for.

Here are some of the young potential loanees who I think could do that job. I’m looking for good dribbling, passing, vision, flair and athleticism.

Who should we put offers in for?

Beyond Carey, Lameiras and Grant, there isn’t the quality in depth on the wings. We need cover for these players, I’m considering the versatile Anthony Forde on loan.

Any suggestions for wingers, let me know.

Also I’ve offered £1000 a week to former Real Madrid and Italian journeyman Antonio Cassano because I can.

He can’t run, but he can score goals.

Also, check out that 20 flair.

Should I go through with the deal?

That’s all for this opening post, congratulations if you made it this far. Was a lot to get through.

Stay tuned for more updates, see you next time.

Tweet Argyle Life with your comments or with the hashtag #ArgyleLifeFM19 or get involved with the discussion on Pasoti.